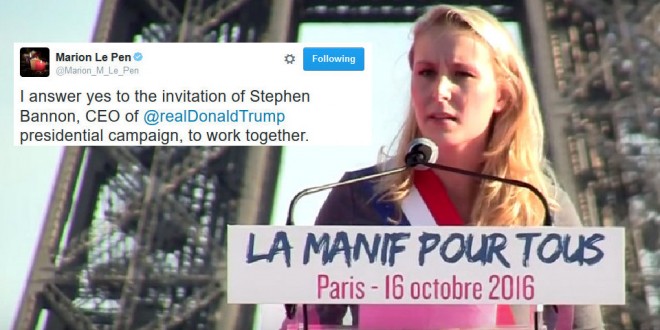 Marion Marechal-Le Pen today declared that she has been hired by Breitbart CEO and Trump campaign chief Steve Bannon as part of the site’s previously announced expansion into France and Germany. Marion is the granddaughter of the Jean-Marie Le Pen, founder of France’s neo-Nazi National Front Party, and the niece of Marine Le Pen, whose chance of ascending to France’s presidency next year have improved since the election of Donald Trump.

Marion, 26, is the youngest person ever elected to the French Parliament, one of two National Front candidates to win seats in 2012. Last month she headlined a massive anti-gay rally in Paris organized by the anti-LGBT hate group La Manif Pour Tous, which called for the next president (possibly, her aunt) to support the repeal of same-sex marriage. Marion also marched in the often violent La Manif Pour Tous rallies during France’s 2013 run up to marriage equality. Those rallies were also supported by multiple nationalist groups including the Civitas Institute, which advocates for France to become a Catholic theocracy.

Earlier this year Marine Le Pen’s second-in-command condemned Paris Pride as “perverse and decadent.” The youth leader for the National Front, whom the French press has dubbed “Petit Putin,” has openly called for France to institute repressive “homosexual propaganda” laws similar to Russia’s. Family patriarch Jean-Marie Le Pen has been convicted multiple times for inciting racial hatred and for denying the Holocaust. In 2014 Jean-Marie horrified France’s media by “joking” about sending his critics, including Madonna, to the gas chamber.

Should Marine Le Pen win next year’s election, Breitbart will have helped install the presidents of both the United States and France and helped promote Britain’s exit from the European Union via their partnership with now-former UKIP leader Nigel Farage.

Now we wait to see which extremist will be tapped to help Breitbart further exploit Germany’s rightward lurch to nationalism. As I noted earlier this week, for nearly a century we’ve worried about European extremists gaining a foothold in the United States. Few imagined that it would be America that would export fascism.