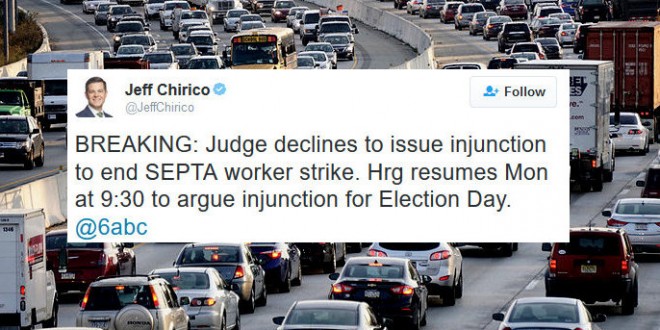 SEPTA’s request for a judge to file an injunction to end the strike by Transport Workers Union Local 234 was declined on Friday evening, but there will be another hearing on the issue Monday. In that hearing, SEPTA will argue for an injunction to force workers back on the job in time for Election Day.

SEPTA has argued the strike would make it difficult for people who vote after work to make it to their polling places, given the time it takes to walk or the added travel time caused by clogged streets.

Pennsylvania is a battleground state, and the vote in overwhelmingly Democratic Philadelphia is critically important to Democratic presidential nominee Hillary Clinton as she battles Republican Donald Trump.

TWU Local 234 President Willie Brown said in a statement, “We will fight SEPTA’s request for an injunction tooth and nail. We would prefer, however, to concentrate our attention on productive bargaining to reach a fair settlement. At this point, only a handful of issues separate the parties.”

SEPTA argues the elderly, disabled and ill are in danger of losing access to needed services, while more than 50,000 students have to find other ways to get to school. The strike shut down transit service that provides about 900,000 rides a day. Pensions, work rules and health care costs are among the issues on the bargaining table.