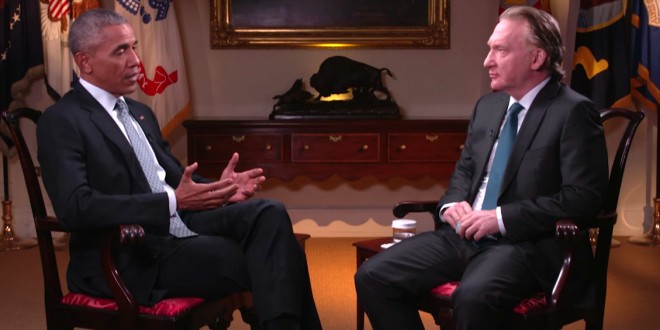 Bill Maher’s months-long on-air campaign to persuade President Barack Obama to appear on his HBO show “Real Time” culminated Friday evening with the airing of the president’s sit-down interview with the left-leaning host.

The 40-minute interview was taped Tuesday at the White House in the Roosevelt Room. The interview was wide-ranging, with the pair discussing the election, the popularity of Donald Trump, and issues including Obamacare, immigration reform, the legalization of marijuana and climate change.

Obama, who said the decision who to vote for Tuesday “should be really clear” (read: Hillary Clinton), didn’t mince words about disenfranchised voters. “Anyone who sits on the sidelines or makes a protest vote is a vote for Trump,” Obama said, “and that would be badly damaging to this country, and damaging for the world.”

The president continued, “The stakes are high. The choice in this election should be really clear. Every single issue we’ve made progress on in the last eight years is going to be on the ballot.”