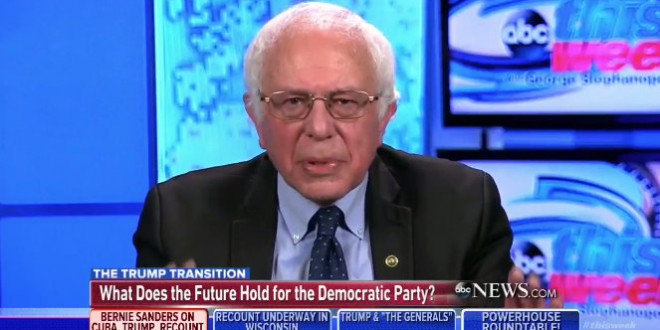 Those despairing about Donald Trump’s election to the presidency should not be getting too excited about a Green Party-driven recount in some states, Sen. Bernie Sanders said Sunday on ABC’s “This Week.” Sanders also sought to ensure that voters know the recount, which he said is “not a big deal,” is not being driven by the Democrats.

“The Democrats, Martha, are not doing the recount,” Sanders told ABC correspondent Martha Raddatz. “I trust that you know that was initiated by the Green Party, who has every right in the world to do it.”

Trump and his team have angrily decried the recount as a hypocritical move on the part of those Democrats participating, and the White House has pushed back on claims that the outcome could be altered.

Bernie Sanders: We must “revitalize the Democratic Party…There is no reason why we cannot win in states all over this country” #ThisWeek pic.twitter.com/c2bP5bkiQr