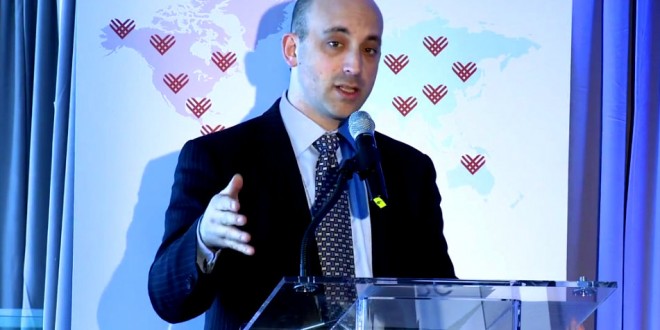 Anti-Defamation League CEO: If Trump Creates A Muslim Database, This Proud Jew Will Register For It

Jonathan Greenblatt, CEO of the Anti-Defamation League, pledged to register as a Muslim on the national database that President-elect Donald Trump vowed to create during his campaign.

Greenblatt made the vow in his opening remarks at the ADL’s Never Is Now conference on anti-Semitism, held Thursday and Friday in midtown Manhattan. It came the day after a spokesman for a pro-Trump PAC cited World War II-era Japanese internment camps in an appearance on Fox News.

Greenblatt said, “In the past we were not able to live, work or learn anywhere we wanted to. Anti-Semitism was acceptable in society. Those were days that were much darker in this country. At that most difficult moment the founders of the ADL said that we American Jews, a group that lacked power and had no real standing, whose future was shaky and uncertain, would use our power for good.”

“We need to speak out wherever we see anti-Semitism and bigotry, whether it’s a publicly traded company or high ranking official. No one has an excuse for excusing intolerance,” he said. “We must stand with our fellow Americans who may be singled out for how they look, where they’re from, who they love or how they pray.”

The sold out audience of about 1,000 people applauded his last statement. But even bigger applause came when Greenblatt said, “The new administration plans to force Muslims to register on some master list. As Jews we know what it means to be forced to register.

“I pledge to you that because I am committed to the fight against anti-Semitism that if one day Muslim Americans are forced to register their identities, that is the day that this proud Jew will register as Muslim.”