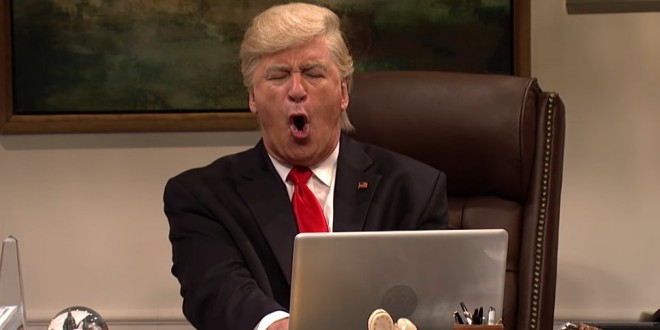 Alec Baldwin made his return as Saturday Night Live‘s Donald Trump tonight, with the President-elect more confused than belligerent, and joined in a surprise appearance by Jason Sudeikis as Mitt Romney. “This isn’t going to work, is it?,” a stiff and awkward Romney said after an uncomfortable few seconds with the Donald.

The show’s writers clearly worked fast today, referencing this afternoon’s meeting between Trump and Romney, as well as Mike Pence’s boo-filled visit to Broadway. “I heard you went to see Hamilton,” Baldwin’s Trump said to Beck Bennett’s Pence. “How was it?”

“It was good,” Pence replied. “I got a free lecture.” The gist of Baldwin’s brief cold open as Trump – no Hillary this week, with Kate McKinnon instead playing an exhausted and exasperated KellyAnne Conway – was Trump’s slowly dawning realization of what he’s gotten himself into.