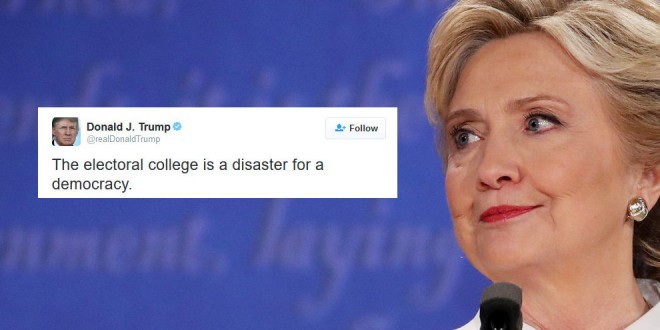 Four years ago when he thought that Mitt Romney had won the popular vote, Donald Trump went on a Twitter tirade, calling for a “revolution” against the Electoral College. This week, millions of liberals have agreed with him. Via Mediaite:

Over 2.2 million people have signed a petition urging the electoral college to ignore the actual result of the 2016 presidential election and certify Hillary Clinton as president instead. “Secretary Clinton WON THE POPULAR VOTE and should be President,” the Change.org petition reads. “Hillary won the popular vote. The only reason Trump ‘won’ is because of the Electoral College.” The petition got a boost when it was shared by a wide variety of celebrities on Twitter, most notably Lady Gaga.

It actually is possible for some electors to ignore the will of their state and cast their vote for someone other than the candidate they’re pledged to. In practice, this rarely happens; the last “faithless elector” was a D.C. elector who cast no votes in 2000 to protest the district’s lack of congressional representation. The last elector to vote for a different person entirely was in 1976, when a Washington elector wrote in Ronald Reagan.

On December 19, the electors will cast their votes for president in their respective states. But while in the modern era this ceremonial occasion has been a formality that reiterates the results of statewide votes, it seems to be at least technically possible that electors could instead defy their states and vote for whomever they choose.

According to the National Conference of State Legislatures, about 30 of the 50 states have passed laws “binding” their electors to vote in accordance with the presidential popular vote in their state. But in most, the penalty for not doing so is only a fine, and it’s unclear whether stiffer penalties would hold up in court — it’s never been tested, and the Constitution does appear to give the electors the right to make the final call. Furthermore, there are still 20 or so states that haven’t even tried to bind their electors.

This isn’t just theoretical. Richard Berg-Andersson lists nine electors who have indeed gone “rogue” and refused to support their state’s presidential choice in the past 100 years. Their votes were all counted as cast, though there have never been sufficient numbers of them to overturn a presidential election result.

The 2012 tweets below have all been deleted. Previous Log Cabin Republicans: Send Us Money To Help Save The LGBT Advances Won Under President Obama
Next Sen. Harry Reid Goes Ballistic: Donald Trump Is A Sexual Predator Who Has Unleashed A Tide Of Hatred