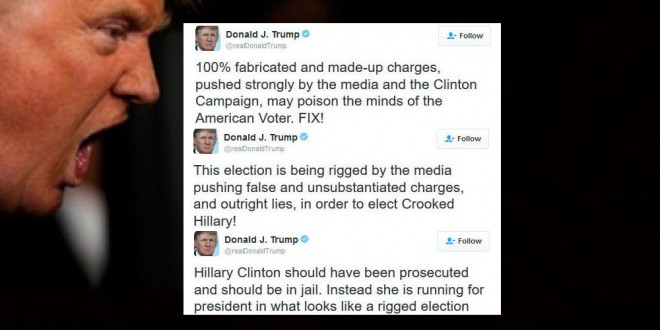 Donald Trump, reeling from a steady emergence of new female accusers, kicked off his Saturday by lashing out at the media and “Crooked Hillary” for trying to “poison the minds” of voters with claims that Trump has a long history of forcing himself on women.

The Republican nominee fired off two tweets before 8 a.m. – using the Android phone that indicates the tweets are from Trump himself – advising supporters to shrug off the accusations that are piling up against him.

“100% fabricated and made-up charges, pushed strongly by the media and the Clinton Campaign, may poison the minds of the American Voter. FIX!” Trump tweeted early Saturday. He followed up with, “This election is being rigged by the media pushing false and unsubstantiated charges, and outright lies, in order to elect Crooked Hillary!”

Two more accusers came forward on Friday, as Trump is trying to spin the fallout from the 2005 tape of him talking cavalierly about sexual assault as a vast “conspiracy” against his candidacy.

Trump has vehemently denied the charges of the female accusers who have followed, and has questioned whether the women were attractive enough to be targets of the Manhattan billionaire.