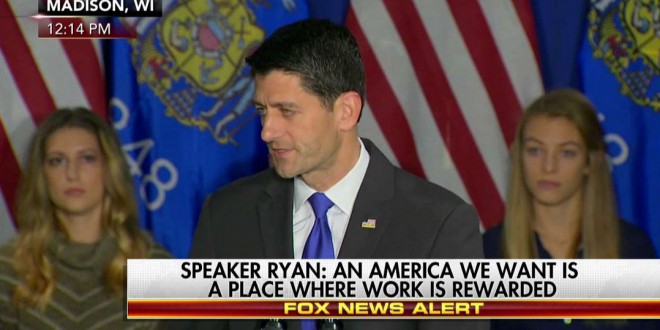 WISCONSIN: Paul Ryan Speaks For 20 Minutes Without Naming Trump, Says Vote For Who You Want [VIDEO]

In a 20-minute speech in Madison, Wis., the nation’s top ranking Republican made only glancing references to the nominee of his own party, noted that he “doesn’t blame” voters who want to sit out the election and argued that emphasized the risks of Democrats winning both the White House and control of Congress.

When asked by a student how to pitch Republicans to skeptical liberals on campus, Ryan responded with what appeared to be a reference to Trump’s habit of tweeting attacks on his rivals. “Don’t talk about the latest Twitter-storm from somebody,” he said. “Don’t walk yourself into some bizarre personality contest.”

“Some people are avoiding making any choice at all,” Ryan tells students about 2016. “I don’t begrudge anyone that.” https://t.co/vK2nqjpeXV

Previous Another Trump Accuser Comes Forward: He Slip His Hand Up My Skirt And Touched My Vagina [VIDEO]
Next Trump Again Says His Accuser Is Too Ugly To Assault: Believe Me, She Wouldn’t Be My First Choice [VIDEO]