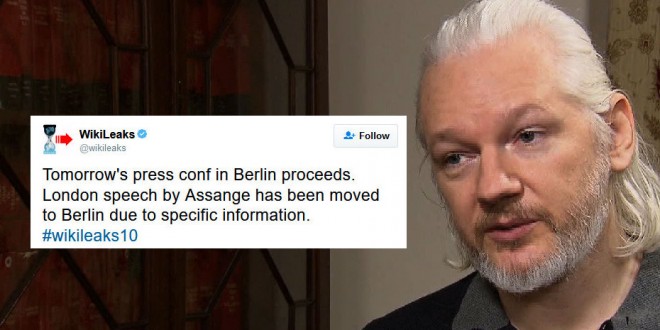 Wikileaks: We’ll Now Do Our Big Reveal From Berlin

WikiLeaks founder Julian Assange cancelled a planned appearance to mark the 10th anniversary of his organization from the balcony of the Ecuadorian embassy in London over security fears on Sunday. He had been planning to give a speech – amid claims he was about to release damaging information about Clinton which some claimed could be an ‘October Surprise’ which would swing the presidential election.

However, Assange, who is wanted by Swedish authorities for questioning in connection with an alleged rape, will make an announcement via video link to an event in Berlin on Tuesday morning. In a tweet on Monday afternoon, WikiLeaks said Assange’s speech in London was moved to Berlin due to ‘specific information’ but did not elaborate further. Donald Trump’s former right-hand man Roger Stone claimed the new WikiLeaks revelations would destroy Clinton’s campaign.

Tomorrow’s press conf in Berlin proceeds. London speech by Assange has been moved to Berlin due to specific information. #wikileaks10