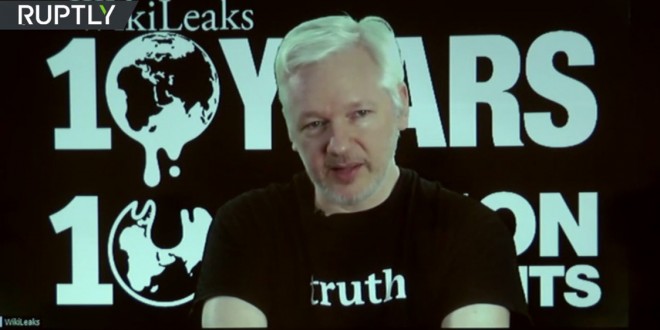 A Tuesday morning WikiLeaks press event in Berlin did not produce an “#OctoberSurprise” to derail the Hillary Clinton presidential campaign that many had expected. “I’ve seen the internet and I understand there is enormous expectation in the United States,” said WikiLeaks editor Julian Assange via video conference at the event, celebrating the 10-year anniversary of the document-leaking site held at 10 a.m. Berlin time (4 a.m. ET).

“Some of that expectation will be addressed [when I announce upcoming projects]. But you should understand that if we’re going to make a major publication in relation to the United States at a particular hour, we don’t do it at 3 a.m.” Many observers believed that Assange had planned to announce a document post with damning evidence of corruption, wrongdoing or other scandal.

On Monday, Trump advisor Roger Stone tweeted “I have total confidence that @wikileaks and my hero Julian Assange will educate the American people soon #LockHerUp.” Stone has claimed to be in contact with Assange. The site InfoWars hosted a live video feed of “Historic Wikileaks October Surprise Coverage” with controversial presenter Alex Jones on hand to do commentary, anticipating a splashy document release.