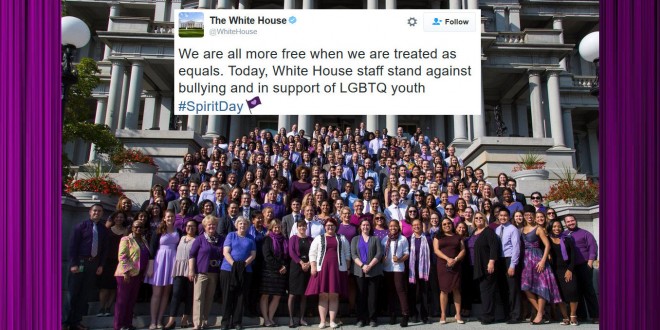 With a sea of staffers dressed in purple on the steps of the Old Executive Office Building in Washington DC on Thursday, The White House voiced its strong support for LGBTQ youth and took a powerful stand against bullying. But the White House team was just one of many among elected and public officials speaking out. Take a look at these amazing activations by some of our nation’s most respected leaders.

Each year, millions of people “go purple” for Spirit Day in a united stand against bullying and to show support for LGBTQ youth. According to a 2015 GLSEN survey, more than half of LGBTQ students report being victimized based on sexual orientation, with a further three quarters of students who report hearing anti-LGBTQ remarks in school.

Started in 2010 by high school student Brittany McMillan, Spirit Day now draws the participation of celebrities, corporations, media outlets, sports leagues, schools, faith institutions, national landmarks, and individuals around the world, who join together in a united stand against bullying.

We are all more free when we are treated as equals. Today, White House staff stand against bullying and in support of LGBTQ youth #SpiritDay pic.twitter.com/kI4HcDlyDI

Proud to go purple on #SpiritDay to stand up against bullying and support #LGBTQ youth. pic.twitter.com/PTcKOEfPk5