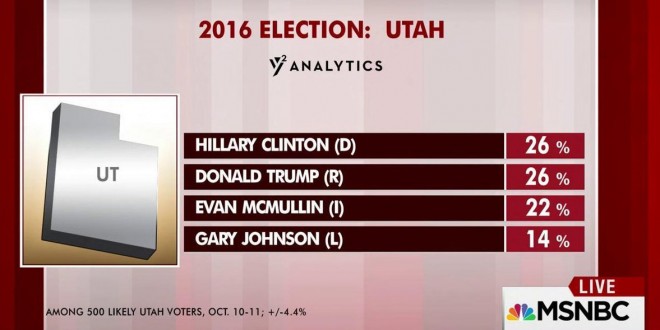 The poll conducted by Salt Lake City-based Y2 Analytics finds that Trump’s double-digit lead in the state has evaporated after his “grab ’em by the pussy” remarks. Trump is tied with Clinton with both receiving 26% of the vote. McMullin is not far behind with 22%, while Libertarian Gary Johnson is polling at 14%. The poll has a margin-of-error of ±4.4.

McMullin’s relatively high numbers come despite only 52% of those polled even recognizing his name. Of those who do, however, four out of five approve of his candidacy. McMullin’s highest levels of support come from the state’s LDS population, with Mormons strongly preferring the independent social conservative over Trump.