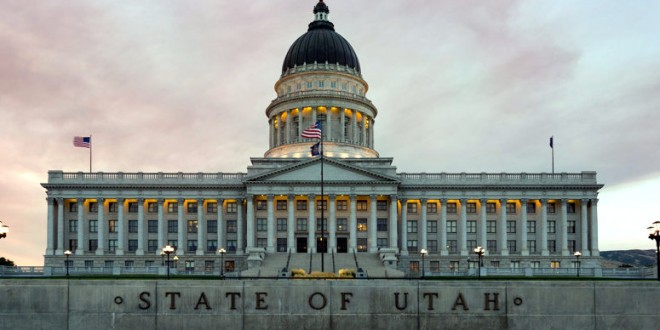 Filed in Salt Lake City’s U.S. District Court, the suit asks a federal judge to strike what it calls anti-lesbian, -gay, -bisexual and -transgender curriculum laws because they are unconstitutional and violate First Amendment rights to free speech, 14th Amendment rights to equal protection and laws that prohibit sex discrimination and equal access.

“The anti-gay school laws were enacted in order to express moral disapproval of ‘homosexuality’ and of LGBT persons,” court papers say. “They do not serve any legitimate state interest.”

Equality Utah Executive Director Troy Williams announced the lawsuit to thunderous applause at the organization’s annual fundraiser, the Allies Dinner, on Friday night, noting that the laws are some of the most odious anti-LGBT regulations that remain on the books.

“It explicitly stigmatizes queer students. It sends a message that our lives are something shameful, something that must be censored and erased,” Williams said to the crowd of more than 2,000. “The time has come to end the stigma and strike ‘no promo homo’ from state law.” The lawsuit is the first of its kind in any state.

Via press release from the National Center for Lesbian Rights:

The lawsuit—the first of its kind in the country to challenge such state laws—alleges that the laws violate the U.S. Constitution and federal education law by discriminating against LGBT people and restricting the First Amendment rights of students and teachers.

“These are some of the last remaining anti-LGBT laws that are currently being enforced in the country, and they’re especially odious, because they explicitly apply to school classes on every subject,” said Equality Utah Executive Director Troy Williams. “These laws send a message that our lives are shameful and must be hidden and censored. They create a deadly culture of silence and non-acceptance, causing harms that can never fully be undone. The time has come to end the stigma and strike down this shameful law.”

The lawsuit challenges several Utah laws and regulations that prevent positive portrayals of gay, lesbian, and bisexual people in curricula, classroom discussions, and student clubs. The lawsuit claims that these discriminatory restrictions create a negative environment for LGBT students, perpetuate discrimination and bullying, and contribute to the high rates of anti-LGBT harassment in Utah schools. For instance, one plaintiff experienced severe physical and verbal harassment from other students in his kindergarten class based on his gender non-conformity. When his parents complained to school leaders about the harassment, they were told that the school district could not protect their son because of these discriminatory school laws.

The lawsuit also describes the many other ways that these laws harm students and teachers, including preventing students from receiving accurate information about sexual orientation and LGBT people, even when it serves important educational purposes, and prohibiting teachers and students from sharing positive views of LGBT people. For example, one of the student plaintiffs was given a class assignment to give an oral family history report and wanted to report on his uncle’s marriage to his same-sex spouse, but was told he could not talk about his uncle in front of his classmates.

“We are honored to represent Equality Utah and these brave students and their families in this historic case,” said Ropes & Gray partner Douglass Hallward-Dremeier, who argued before the U.S. Supreme Court in Obergefell v. Hodges, which struck down state laws barring same-sex couples from marrying. “These discriminatory laws are outdated, harmful, and blatantly unconstitutional. They serve no purpose other than to isolate and stigmatize young people who deserve to be fully supported and embraced.”

At least seven states have laws similar to Utah’s. They’re commonly referred to as “no promo homo” laws.