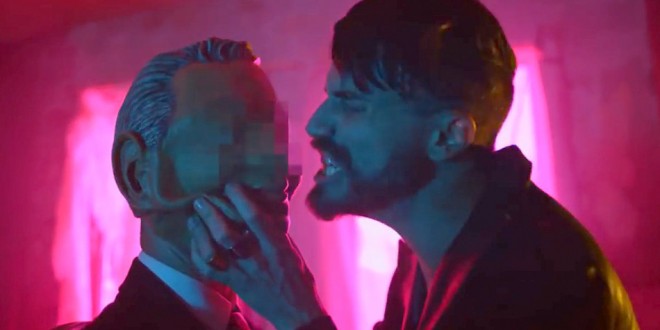 Beefy bears, blasphemy, and a NIN-esque beat. What’s not to like? Radio.com reviews:

Neon Trees’ singer Tyler Glenn is rather famously working through a crisis of faith on his upcoming solo debut Excommunication. The Mormon singer came out in 2014 and had hoped to find a way to blend his identity with his religion until the Church of Jesus Christ of Latter-day Saints (LDS) announced a new ruling soon after that all gay members were apostates.  Glenn premiered the new video for his second single “Shameless” today, and, in it, he toys with religious iconography. Sitting on a bare mattress, Glenn leaps to as the music begins. He dances around and even licks a tied-up man in a suit. Based on his last video, in which Glenn spit on an picture of church founder Joseph Smith, the well dressed restrained man could possibly once again represent Smith.