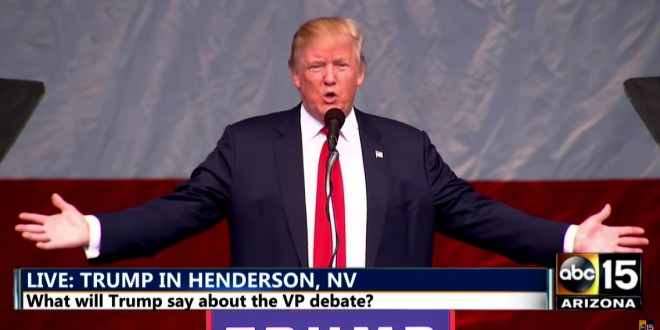 At today’s rally in Nevada:

Donald Trump on Wednesday threatened to sue over a “nasty commercial” he said depicted him as unsupportive of military veterans. “I saw today — I left the room and I saw a commercial where it was really a nasty commercial, totally made up about me with vets. There is nobody that loves the vets more or respects the vets more,” Trump said. “They’re spending hundreds of millions of dollars on false commercials and it’s a disgrace. So what we’ll do — I guess we’ll sue them. Let’s sue them. Right? Let’s sue them.”

Trump did not specify which ad he was referring to or which group ran the ad. His campaign did not respond to requests for details. But the Clinton campaign launched an eviscerating ad last month entitled “Sacrifice” that featured veterans watching Trump make disparaging comments about veterans and the military, including his comment arguing that Sen. John McCain, who was tortured for several years as a prisoner of war in Vietnam, was “not a war hero.”