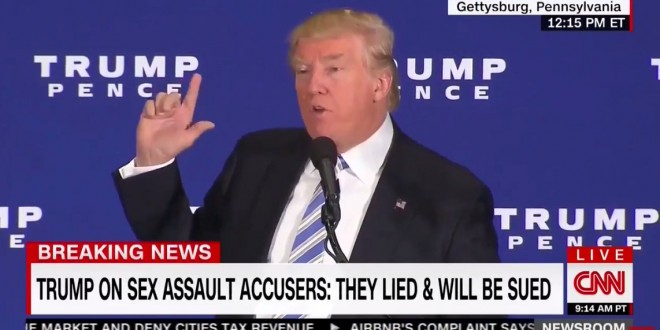 Donald Trump vowed Saturday to sue the women who have accused him of sexual misconduct in recent weeks. “Every woman lied when they came forward to hurt my campaign,” Trump said during remarks in Gettysburg, Pennsylvania. “Total fabrication. The events never happened. Never. All of these liars will be sued after the election is over.”

He added that a “simple phone call” to major news outlets “gets them wall-to-wall coverage with virtually no fact-checking ever.” In the last two weeks, at least 10 women have come forward accusing Trump of inappropriately touching them. Their allegations came after a 2005 videotape surfaced of Trump bragging about being able to grope women and get away with it.

Trump often threatens to file lawsuits without actually doing so. Earlier this month, he threatened to sue The New York Times when it published assault allegations against him, but nearly two weeks later, he has declined to follow through.

Trump also launched attacks on the “dishonest” media, the “rigged” political system and his Democratic rival, Hillary Clinton. He questioned why Clinton was even allowed to run due to her handling of emails as secretary of state.

“The system is also rigged because Hillary Clinton should have been precluded from running for the presidency of the United States, but the FBI and the Justice Department covered up her crimes,” Trump said.

Referring to the proposed mega deal for AT&T to buy Time Warner, the GOP nominee decried the concentration of ownership of the country’s media in the hands of “too few.”

The nation’s mainstream media is “corrupt,” Trump said. “They lie and fabricate stories to make a candidate that is not their preferred choice look as bad and even dangerous as possible. They’re trying to poison the mind of the American voter.”

Trump then laid out some plans for his first 100 days in office if elected, including pledging to deport millions of what he called “criminal illegal aliens,” who are “drug dealers” and “killers.”.