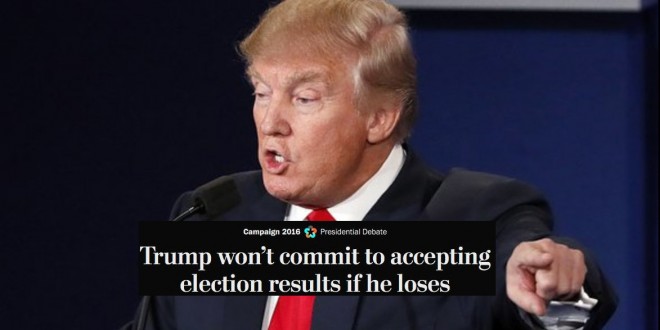 Donald Trump Refuses To Say If He’ll Accept The Results Of The Election: I Will Keep You In Suspense [VIDEO]

This will be the headline around the world in the morning. Via the Washington Post:

Donald Trump declined to say during Wednesday night’s debate whether he would accept the results of the presidential election if he lost.

“I will tell you at the time,” Trump told the moderator, Fox News’ Chris Wallace, after Wallace asked whether Trump would follow the American tradition of accepting the results of presidential elections. “I will keep you in suspense.”

During this section of the debate, the third between the candidates, Trump referenced what he said was a “rigged” election: He blamed the news media for “poisoning” minds against him, and the FBI for not prosecuting Clinton for her use of a private email server to handle government business while she was secretary of state.

Clinton attacked Trump in turn for defying the long-standing tradition of accepting election results, and referenced an episode from Trump’s previous career as a reality TV host. “He even tweeted that the Emmys were rigged,” Clinton said, referencing Trump’s gripes after he failed to win the award for “The Apprentice.”

“I shoulda gotten it,” Trump interjected. The exhange followed closely after Trump rejected the accounts of women who have accused him of groping them or kissing them without their consent, calling those reports “lies” and fiction.

Trump: “I will keep you in suspense” on if I accept the election results
Clinton: “That is horrifying”#debatenight https://t.co/gVx7ENJKIb

Previous LIVE VIDEO II: The Final Presidential Debate
Next Kellyanne Conway: Trump Will Accept The Results Of The Election Because He’ll WIN The Election [VIDEO]