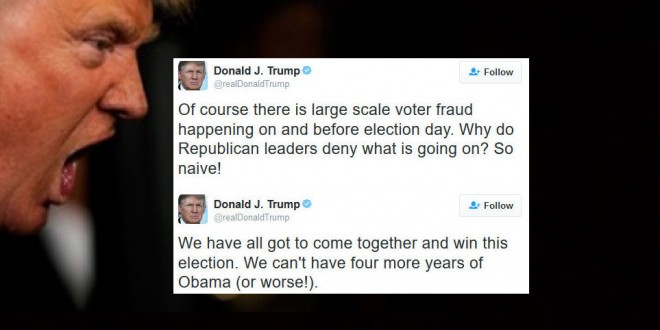 Donald Trump this morning repeatedly his insane claim that the election will be stolen from him. A new poll reveals the majority of his supporters agree. Via Politico:

The American electorate has turned deeply skeptical about the integrity of the nation’s election apparatus, with 41 percent of voters saying November’s election could be “stolen” from Donald Trump due to widespread voter fraud.

The new POLITICO/Morning Consult poll — conducted among 1,999 registered voters Oct. 13 through Oct. 15 — shows that Trump’s repeated warnings about a “rigged” election are having effect: 73 percent of Republicans think the election could be swiped from him. Just 17 percent of Democrats agree with the prospect of massive fraud at the ballot box.

The public sentiment is beginning to reflect Trump’s campaign message. Over the last week, the GOP nominee has intensified his criticism of the U.S. electoral system, much to the chagrin of elected Republicans, who think it threatens the peaceful transfer of power. Trump calls the process rigged, and has said the media is colluding with Hillary Clinton to throw the presidential race in her favor.

Trump’s comments casting doubt upon the process have drawn a gentle rebuke from House Speaker Paul Ryan, whose spokesperson put out what would ordinarily be an unremarkable statement on Saturday: “Our democracy relies on confidence in election results, and the speaker is fully confident the states will carry out this election with integrity.”

Previous Wikileaks: Julian Assange’s Internet Has Been Cut
Next Hillary Ad: Bully Trump Is Like The Mean Girls [VIDEO]