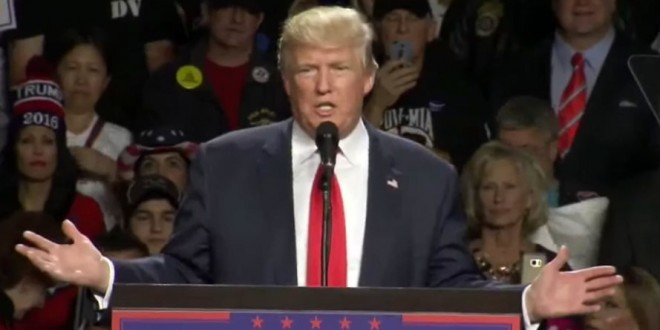 Trump: Hillary Is A Terrible Example For My Son (Unlike Pussy-Grabbing And Perving On Underage Girls)

Because pussy-grabbing is a GOOD example. Talking Points Memo reports:

Donald Trump said Monday that Hillary Clinton’s purported advance knowledge of two debate questions during the Democratic primary race made her a “bad example” for his 10-year-old son and other children, subverting one of Clinton’s own most frequent attack lines against him.

“Hillary Clinton gets the questions to a debate, and then what happens is, the media, they don’t ever say ‘Why didn’t you turn it in? Why did you use those questions?’” Trump said at a rally in Warren, Michigan.

He was referring to an email stolen from Clinton campaign manager John Podesta and published by WikiLeaks that purports to show Donna Brazile, the interim chair of the Democratic National Committee who previously served as a CNN contributor, feeding a debate question to Clinton ahead of a March Democratic primary debate in Flint, Michigan. “I have a son named Barron, and let me tell you, she is a terrible example for my son, and for the children in this country,” Trump said.