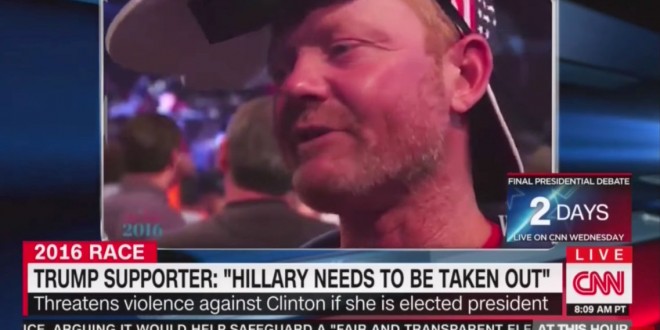 In an interview with The Wall Street Journal, a Donald Trump supporter at an Ohio rally alluded to the need to assassinate Hillary Clinton if she won the presidency, calling it his duty as a “patriot.”

“I feel like Hillary needs to be taken out,” said a rally-goer named Dan Bowman. “If she gets in the government, I’ll do everything in my power to take her out of power. If I have to be a patriot, I will.”

“What does that mean?” WSJ asked. “Take it any way you want to take it,” Bowman responded enigmatically. “That sounds like a threat,” they pointed out. “I’m a patriot,” he responded. “Is that a physical threat?” WSJ pressed. “I don’t know. Is it?” he deflected.

Bowman was also interviewed by the Boston Globe:

“If she’s in office, I hope we can start a coup. She should be in prison or shot. That’s how I feel about it,” Dan Bowman, a 50-year-old contractor, said of Hillary Clinton, the Democratic nominee. “We’re going to have a revolution and take them out of office if that’s what it takes. There’s going to be a lot of bloodshed. But that’s what it’s going to take. . . . I would do whatever I can for my country.”

He then placed a Trump mask on his face and posed for pictures. Trump’s campaign has taken a sharp turn toward such dark warnings in recent days. He says he is a victim of conspiracies, portrays himself as a martyr to the cause of the right wing, and is stoking anger in advance of what may be a defeat on Nov. 8.

Previous John McCain: The Republican Party Will Be United Against Any SCOTUS Nomination Made By Hillary
Next Homocon Bloggers Fall For “Voter Fraud” Troll On Twitter And Rush Limbaugh Cluelessly Repeats The Story