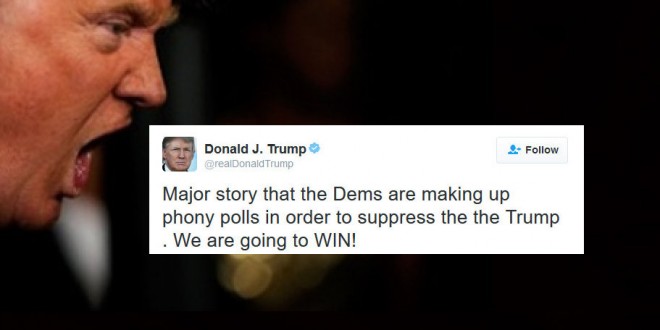 Donald Trump accused Democrats on Monday of manufacturing fake polls that show him trailing in the presidential election in order to discourage the GOP nominee’s supporters from voting on Election Day. “Major story that the Dems are making up phony polls in order to suppress the the [sic] Trump,” the Manhattan billionaire wrote on Twitter Monday morning. “We are going to WIN!”

Trump did not specify which polls he believed to be fake, nor did he offer any further clarity on which Democrats or Democratic institutions were concocting the “phony” polls. Widely respected and accepted polls have shown Trump trailing badly in recent days, including some that put Democrat Hillary Clinton up by double-digits. The former secretary of state holds a 5.8 percentage point lead in the Real Clear Politics polling average, 45 percent to 39.2 percent.