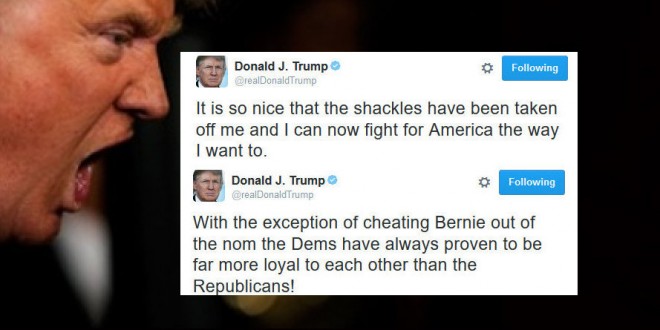 Trump Declares War On GOP: “The Shackles Are Off”

Donald Trump celebrated his freedom from the Republican establishment Tuesday, boasting that it’s “so nice” to be unchained. Trump’s tweet was a tacit attack on House Speaker Paul Ryan, whom the Republican nominee has continued to lash out at since the top elected Republican on Monday told his conference he would no longer defend Trump. “It is so nice that the shackles have been taken off me and I can now fight for America the way I want to,” Trump tweeted.

The real estate mogul also highlighted the chasm in the Republican Party, conceding that Democrats are “far more loyal” than the GOP. More than two dozen Republicans have either said they will no longer support their nominee or called on him to step aside from the top of the ticket since a tape emerged Friday showing Trump speaking in incredibly lewd terms about sexually assaulting women. Trump began blasting Ryan on Twitter at about 8 a.m., when he posted a tweet criticizing the GOP leader for not supporting him and followed up by calling him “weak and ineffective.”

Trump now has it in his power to conjure what @MattMackowiak calls “an extinction-level event” for the GOP.