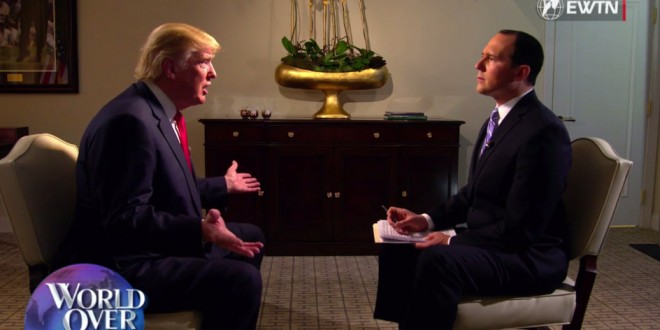 Republican presidential nominee Donald Trump is making his pitch to Catholics, many of whom could serve as important swing voters in states such as Florida and Pennsylvania. The latest poll from the Public Religion Research Institute showed a stark divide among white Catholics: 44 percent said they support Democratic candidate Hillary Clinton while another 44 percent said they support Trump.

In a new interview with the global Catholic network EWTN scheduled to air Thursday at 8 p.m., Trump made his case, telling the global Catholic network what he prays for, his favorite saint and what sparked his evolution on abortion. He also blamed Clinton for leaked e-mails from her campaign that were widely circulated that appeared to show a staffer joking about Catholics and evangelicals.

Trump dismissed sexual assault accusations that women have made against him when asked about the lewd comments he made on Access Hollywood. “The microphones, I mean to be honest should, you know, should never have been on, but that was locker room talk,” Trump said, adding that he has made his apologies. Asked who his favorite saint is, Trump named Mother Teresa and Pope John Paul II.

Previous Gary Johnson Melts Down With Reporter: If I’m Doing So Poorly, Why Are You Even Interviewing Me? [VIDEO]
Next Pussy Riot Grabs Back With Music Video Depicting Horrifying Vision Of Donald Trump’s America [VIDEO]