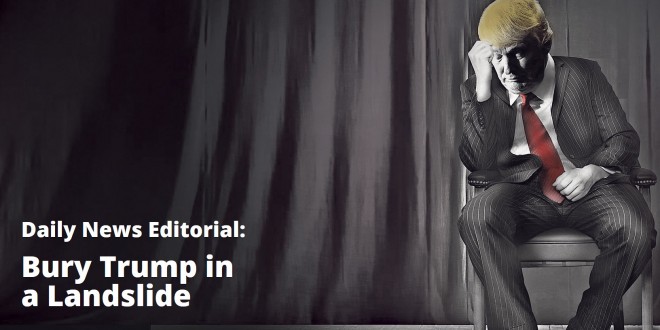 When deliberating over a presidential endorsement, the Daily News Editorial Board strives to identify the person who offers the greatest promise to brighten the futures of Americans and to safeguard the national security. Never have we questioned a candidate’s fitness to serve. Then came Donald Trump — liar, thief, bully, hypocrite, sexual victimizer and unhinged, self-adoring demagogue.

The 16-month campaign since Trump vaingloriously entered the race has horrifyingly revealed that the Big Lie brazenly told — built on smaller falsehoods and spread by social media and a lust for TV ratings — can bring the United States to the brink of electing an aspiring strongman with no moral bearing or self-control. But, now, with his defeat all but certain, Trump is conjuring for his followers demons that conspire to destroy them and the nation.

Chillingly, he refused in Wednesday night’s debate to commit to honoring the results of the November election. Doing so, he questioned the fundamental soundness of America’s democracy. Trump’s reckless willingness to damage trust in the electoral process — in order to save face and hold leadership of the paranoid wing of U.S. politics — is the most pressing reason why voters must defeat him in a landslide.

To take full stock of Trump must be to understand the urgency of barring him from the White House, as well as to reckon with how an authoritarian fabulist has gotten so close to leading the globe’s beacon of democracy.

History will mark the presidential contest of 2016 for demagoguery that distorted America’s electoral process from a competition of ideas into, on the one hand, a reach for power based on a cultish thirst for vengeance, and, on the other, a bipartisan drive to save the American presidency itself. Herewith, we fervently pray, is the political obituary of Donald Trump and all that he stands for.

Hit the link for the obituary.