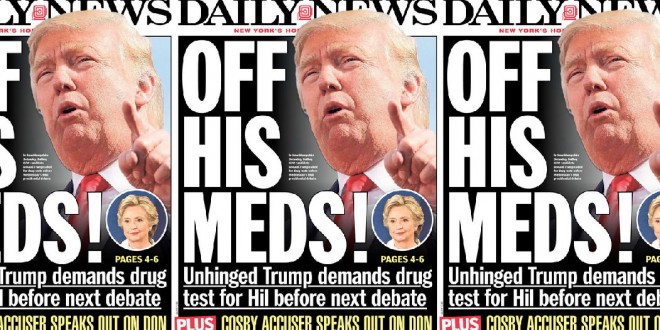 Donald Trump — the would-be whiner-in-chief — unleashed a bizarre accusation on Saturday, saying Hillary Clinton was “pumped up” during their last presidential debate and that both candidates should take drug tests before their next showdown.

And, in a familiar refrain, the Republican nominee claimed the election was rigged against him, as the number of women accusing him of sexual assault inched toward Bill Cosby territory.

The next and final presidential debate is on Wednesday in Las Vegas. Flailing Trump’s suggestion that Clinton had taken performance-enhancing drugs came during a speech in which Trump decried the opioid addiction ravaging communities in New Hampshire. Drug use was only one smear Trump deployed against Clinton as he trails her in the polls by as much as 11% nationally.