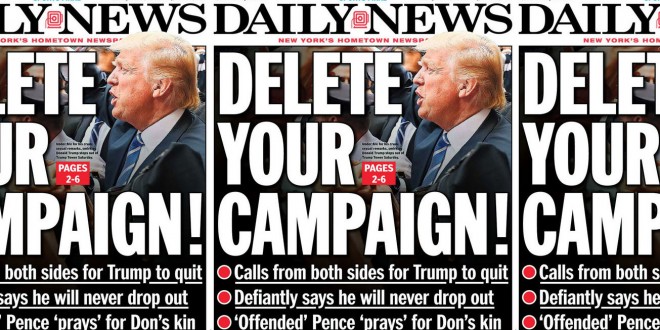 The chorus of Republican lawmakers calling on Donald Trump to quit his problem-plagued presidential campaign grew Saturday — more fallout stemming from his latest misogynist remarks that even disgusted his running mate.

Indiana Gov. Mike Pence, in a statement dripping with revulsion, distanced himself from the top of the ticket. “We pray for his family,” said Pence.

The raunchy Republican — after meeting Saturday with top advisers New Jersey Gov. Chris Christie and Rudy Giuliani, tweeted from inside Trump Tower that he had no plans to back down despite the growing criticism.

TV host Nancy O’Dell, the woman Trump was discussing in the video, said: “Politics aside, I’m saddened that these comments still exist in our society at all. … It was disappointing to hear such objectification of women. The conversation needs to change because no female, no person, should be the subject of such crass comments, whether or not cameras are rolling.”

Even Trump’s third — and current — wife, Melania, condemned the remarks as “unacceptable and offensive” — but insisted they were not representative of his true beliefs.

“He has the heart and mind of a leader,” she said in a statement. “I hope people will accept his apology, as I have, and focus on the important issues facing our nation.”