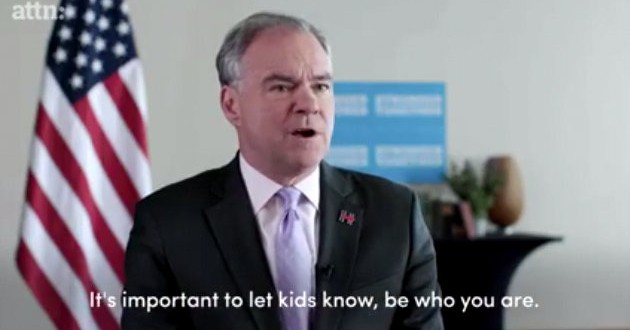 Via press release from the Clinton campaign:

In honor of National Coming Out Day, Vice Presidential nominee Tim Kaine sat down with ATTN: Editor-In-Chief Matthew Segal, telling him that it is incumbent upon adults in leadership positions to promote the message of acceptance.

Amid clips of LGBT kids describing the bullying and hate-speech directed at them, Senator Kaine says that National Coming Out Day is important because we need to let kids know that they should “be proud of who you are. You’re made the way you’re made for a reason…celebrate that and accept it.”

Senator Kaine also said that school districts receiving school safety funding should work to reduce the rate of bullying in their schools. As someone who has been standing up to bullies her whole life, Hillary Clinton, together with Tim Kaine, will continue fighting for the the LGBT community and celebrates National Coming Out Day.