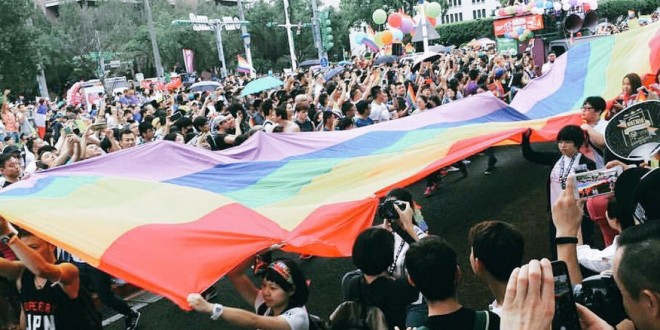 It might have rained on their parade, but Taiwan’s wet weather did not dampen the spirits of Asia’s largest gay pride march, as over 80,000 took to the streets of the capital, Taipei, on Saturday to call for equal rights and same-sex marriage.

Rainbow umbrellas went up, matching a sea of multi-coloured flags and hats, in a typically flamboyant scene that included lederhosen, gravity-defying gold heels, and a dozen young men clad in tiny briefs to advertise a gay social network app with their impeccable pecs. At 2.30pm, as two giant rainbow banners were unfurled and a brass band struck up, the crowd cheered.

This year, more than any in Taipei Pride’s 14 year history, the LGBT community had something to celebrate: same-sex marriage may finally be within their reach, making Taiwan the first country in Asia to grant full equality to LGBT couples.

On the eve of the parade, Taiwan’s Justice Minister, Chin Tai-san, gave marchers fresh hope by pledging that the new government, elected earlier this year, had a clear position on same-sex marriage and backed equality. The official parade theme was “fun together, honour diversity”, but many in the crowd said that marriage equality was their priority.