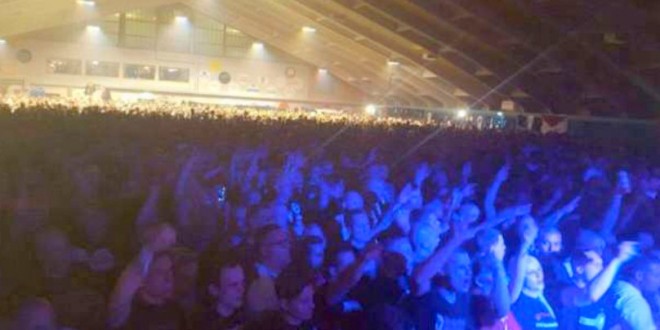 Police in the canton of St Gallen are under fire for allowing a music festival for right-wing extremists to take place on Saturday night. More than 5,000 people turned out to the festival in the usually tranquil commune of Unterwasser in eastern Switzerland for what is thought to be the largest ever gathering of the extreme right on Swiss soil, Swiss media reported.

Bands known for their far-right views were on the bill, including several German groups and Bern-based Amok, who have previously been convicted of racial discrimination and incitement to violence. “We can’t confirm that it was a neo-Nazi concert because we weren’t able to check everybody there, but we can confirm that it was a concert by the extreme right,” police spokesman Gian Rezzoli told the Tribune de Genève.

Questions are now being asked as to how this was allowed to be staged in Switzerland. According to the Tages Anzeiger, the Swiss federal intelligence service warned St Gallen police that such a festival would be taking place somewhere in the area, but the exact location and time were unknown. “We received indications that the concert would be held in southern Germany,” Rezzoli told the paper, saying they only discovered it would be in Switzerland at 3pm on Saturday.

The concert featured German rock bands Stahlgewitter, Frontalkraft, Exzess, Makss Damage and Swiss group Amok, which are well known for their extreme right-wing lyrics. In a statement the anti-fascist group Antifa described the concert as the ‘one of the biggest Neonazi events that has ever taken place in Switzerland’. It claimed the organisers were from the international white supremacist group “Blood & Honour”, which is banned in several countries.

Officials want to know if the words sung during the concert violated anti-racism standards. “If we had known that the event was linked to right-wing extremists, we would never have granted a licence,” said Züllig. He said the local authority was examining whether to pursue legal proceedings against the person who applied for the licence. The communal government has also contacted the public prosecutor’s office.

The Swiss Foundation against Racism and Anti-Semitism says they will file formal charges against the organizers for violating Switzerland’s hate speech laws.

RELATED: The US-based hate site Daily Stormer, which supports Donald Trump, is very pleased about the concert. (I don’t link them.)