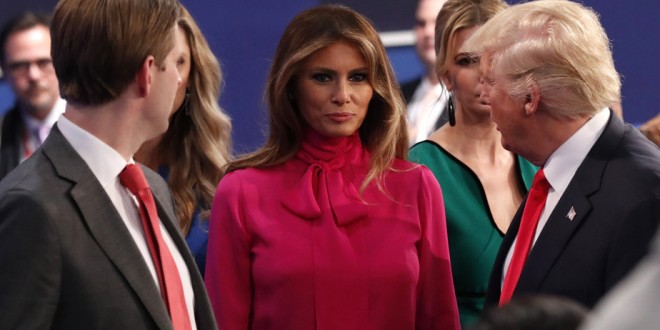 Breitbart is calling it a “troll” to the Clintons. They write:

The potential First Lady’s wardrobe choice came as her husband faced blistering criticism over a recorded conversation in 2005 in which he joked about groping women. One of the words he used included a crude reference to the female anatomy.

In addition to apologizing several times since the video emerged, Trump also pointed at former President Bill Clinton’s behavior towards women and the way in which Democratic nominee Hillary Clinton treated his accusers.

Four of those accusers appeared with Trump at a press conference prior to the debate, and were seated in the front row at the debate at Washington University in St. Louis.

The Gucci “pussy-bow” blouse retails at Net-a-Porter.com for $1,100. The site’s editors note: “Pussy-bow shirts are one of Gucci’s signature silhouettes. New for Pre-Fall ’16, this fuchsia style is cut from silk crepe de chine for a languid drape. We think it’s a chic way to elevate office or weekend looks.”