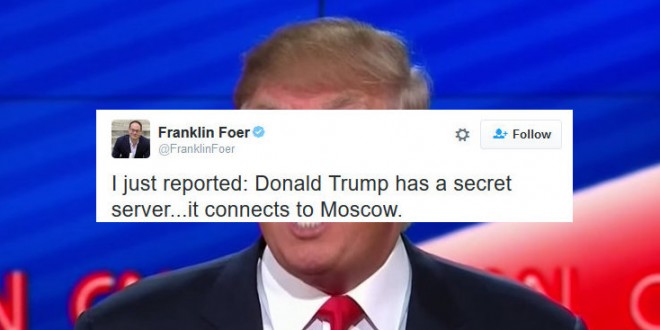 Slate reports tonight that the Trump Organization appears to have a secret server which communicates exclusively with a high-profile Russian bank. The story is loaded with rather technical details. Here’s an excerpt:

Earlier this month, the group of computer scientists passed the logs to Paul Vixie. In the world of DNS experts, there’s no higher authority. Vixie wrote central strands of the DNS code that makes the internet work. After studying the logs, he concluded, “The parties were communicating in a secretive fashion. The operative word is secretive. This is more akin to what criminal syndicates do if they are putting together a project.” Put differently, the logs suggested that Trump and Alfa had configured something like a digital hotline connecting the two entities, shutting out the rest of the world, and designed to obscure its own existence. Over the summer, the scientists observed the communications trail from a distance.

While the researchers went about their work, the conventional wisdom about Russian interference in the campaign began to shift. There were reports that the Trump campaign had ordered the Republican Party to rewrite its platform position on Ukraine, maneuvering the GOP toward a policy preferred by Russia, though the Trump campaign denied having a hand in the change. Then Trump announced in an interview with the New York Times his unwillingness to spring to the defense of NATO allies in the face of a Russian invasion. Trump even invited Russian hackers to go hunting for Clinton’s emails, then passed the comment off as a joke.

You really must read the full article to get the gist of what the quoted web experts believe.