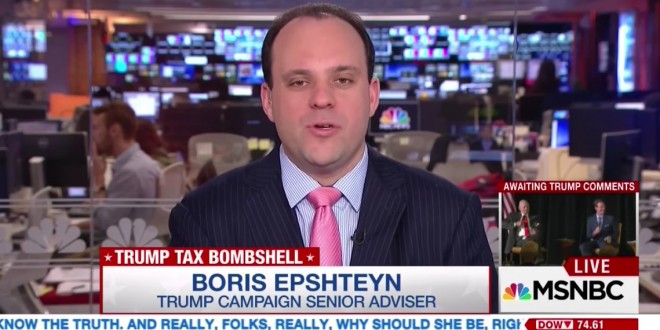 Senior Trump Advisor: That Tax Return Is Fake (And If It’s Not, NY Times Reporters Should Be Jailed) [VIDEO]

According to Epshteyn, the New York Times report that raised questions about tax evasion was based on “alleged documents,” even though the tax returns were verified by the candidate’s former accountant.

“If they are authentic then the New York Times reporters face jail time, five years of jail time for using someone’s tax documents without their approval,” he added. “The story has no facts in it whatsoever.”

Previous Alex Jones: The Next Debate Will Also Be Totally Rigged Because Anderson Cooper Works For The CIA
Next BREAKING: New York Attorney General Orders Trump Foundation To Cease Its Unlicensed Operations