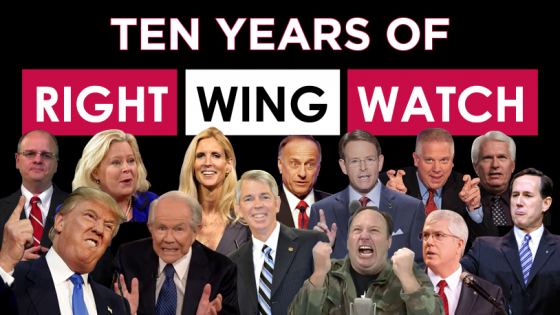 The indispensable Right Wing Watch celebrates their 10th anniversary of fighting the haters today and we send them our congratulations! Hardly one day of those ten years has passed without a Right Wing Watch exposé appearing here on JMG. Peter Montgomery marks the occasion for them:

People For the American Way launched its Right Wing Watch blog a decade ago, taking advantage of the internet’s growth to change the way we disseminate our monitoring, research and analysis of the Religious Right and related political movements. It has never been boring!

The year Right Wing Watch launched, 2006, was the year of the first Values Voter Summit, the largest national political gathering for Religious Right activists, which is organized by the Family Research Council and its allies. The Values Voter Summit took over from the Christian Coalition’s Road To Victory conference after that group’s financial and organizational implosion. (Just to confuse things, Ralph Reed’s Faith and Freedom Coalition now runs its own national gathering in D.C., which it calls the Road to Majority.)

Glancing through Right Wing Watch posts from that first year brings a sense of reverse déjà vu. Among the strangely familiar topics you’ll find: conspiracy theories about George Soros and gay donors brainwashing America’s youth; a televangelist urging Christian parents to withdraw their children from public schools; rumors that “sex with infants” was the latest “trend” among gay people; the Family Research Council warning against “fetus farming”; senators finding time to pass a resolution affirming “In God We Trust” as the national motto; right-wing leaders urging Congress to strip federal courts of the ability to make decisions about marriage; and others threatening to support challengers to any senator who supported immigration reform legislation.

Hit the link above for the rest and check out their new format and layout!

Previous Trump Declares War On GOP: “The Shackles Are Off”
Next Democrats Applaud National Coming Out Day