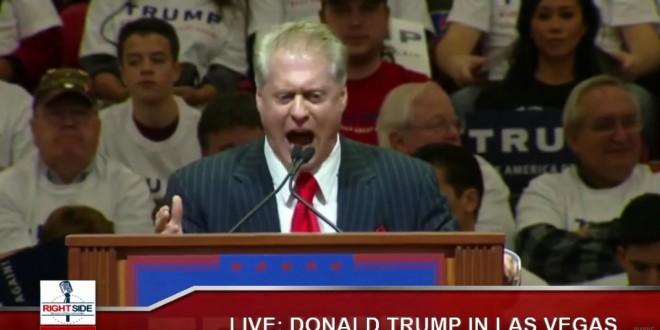 “If you’re a Christian, you just can’t spend your life worrying about the words of Donald Trump from 11 years ago,” Root said, “or what women he groped 30 years ago. I don’t believe any of it anyway. I believe Donald Trump is one of the handsomest billionaires that’s ever lived; I don’t think he ever had to grope a single woman ever. I think they threw themselves at him, so it’s all a lie.”

“The man isn’t a perfect Christian,” Root admitted, but he is “the perfect guy sent from God and from central casting to be the vicious guy we needed to save America, save capitalism, fight the Clinton crime cartel and save Christianity from these vicious, vicious people. They’re terrible, dirty people and a nice guy could have never won this war. Only a dirty player could win the war, so I think Donald’s the perfect guy, sent by God to fill the perfect role and save us all.”

Back in August, Root declared that people on public assistance and women on birth control should be ineligible to vote. Root was the Libertarian Party’s candidate for vice president in 2008.

Previous Mike Pence: Hillary’s Team And Her Media Cronies Are Trying Demoralize Us By Quoting The Polls [VIDEO]
Next Trump Lies About Yet Another Endorsement