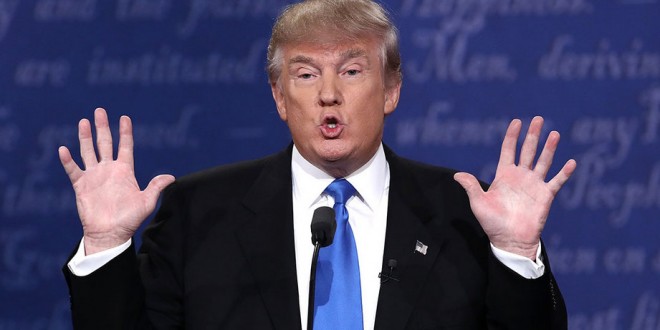 REPORT: Donald Trump And His Companies Have Been Sued At Least 20 Times For Sexual Harassment

One woman sued Donald Trump’s Miami resort saying she lost her job because she got pregnant. Two others claimed they were fired after complaining that co-workers sexually harassed them. And a number of women testified in a lawsuit that Trump himself repeatedly instructed managers to hire younger, prettier workers at his Los Angeles golf club.

The release of a video Friday showing Trump’s sexist remarks in 2005 has created a firestorm of controversy that threatens to derail his campaign. But an ongoing USA TODAY investigation of Trump’s 4,000-plus lawsuits shows that he and his companies have been accused for years of mistreating women. Allegations outlined in at least 20 separate lawsuits accuse Trump and managers at his companies of discriminating against women, ignoring sexual harassment complaints and even participating in the harassment themselves.

The details of these allegations, some not reported until now, suggest that the kinds of lewd and discriminatory actions reported last week may be more prevalent within Trump’s organization than previously known. In one lawsuit, a female supervisor at Trump National Golf Club near Los Angeles said Trump pulled her aside one day to complain about hiring.

“I want you to get some good looking hostesses here,” Trump told Sue Kwiatkowski, she recounted in a sworn statement corroborated by many other employees’ testimony. She said he went on to say, “People like to see good looking people when they come in.” Managers acted on Trump’s directive, she and colleagues testified, to hire younger and “prettier” staff and to make sure other female workers were not seen whenever the big boss visited.

Another supervisor testified she refused to fire a female employee even after her boss threatened punishment, citing Trump’s desire for the woman to be fired because she was “fat.”

Previous BREAKING: Paul Ryan Is Through With Trump
Next Falwell Junior: Establishment Republicans Conspired To Release #Pussygate Tape But It Backfired On Them