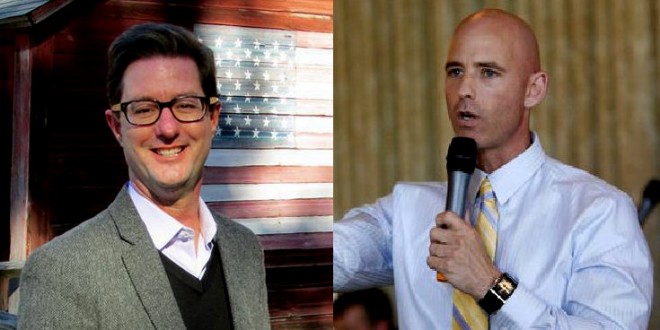 Today Log Cabin Republicans announced its Board of Directors has issued the first wave of endorsements for its federal political action committee (PAC) in the 2016 election cycle, including two candidates — Paul Babeu and Clay Cope — who are poised to make history as the first openly gay non-incumbent Republicans to be elected to the United States House of Representatives.

“These candidates for elected office represent the future of the GOP — strong, pro-equality Republicans with a winning message and a viable path to victory in November,” Log Cabin Republicans President Gregory T. Angelo stated. “LCR PAC will be working from now until Election Day to ensure these common-sense conservatives take their rightful place in the GOP congressional caucus as part of an inclusive Republican majority.”

“I’m honored to earn the support of Log Cabin Republicans, since they stand for personal liberty, less government, and support free market principles that will create jobs.” —Sheriff Paul Babeu.

Back in August, Cope declared that he supports Trump and Pence because “they don’t believe in discrimination.” SERIOUSLY. As for Babeu, see below.

PREVIOUSLY ON JMG: Last month Babeu was endorsed by Dr. Stabby. Babeu earned his first mention here on JMG years ago when he was outed via his Adam4Adam profile. Last month he was endorsed by gay former GOP US House Rep. Jim Kolbe, who was outed in 1996 after his vote for DOMA, although in 2013 Kolbe was a signatory to an amicus brief in support of the repeal of Prop 8. Babeu has stated that marriage should be left for the states to decide. Earlier this year the Phoenix New Times reported that Babeu is currently living with a 22 year-old whom he met in 2012. In March 2012 the Mexican national ex-boyfriend of Babeu sued him for $1M, alleging that Babeu had threatened to have him deported if the boyfriend were to out him. Babeu’s run for the US House fizzled shortly thereafter, but not before it was revealed that he had spoken at an event staged by a group that wants to end illegal and most legal immigration and wants to end automatic citizenship for children born in the United States.