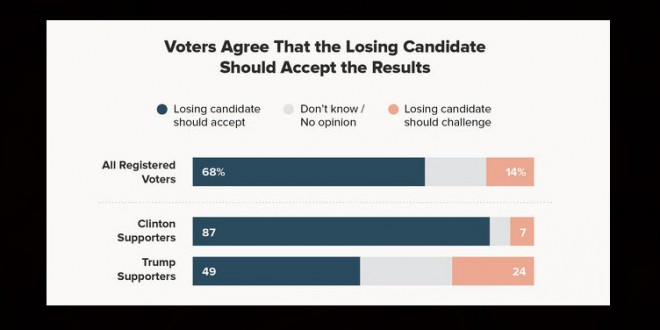 An overwhelming majority of voters — 68 percent — think the loser of the 2016 presidential election should accept the results of the race, according to a new POLITICO/Morning Consult poll conducted after the final presidential debate. Just 14 percent of voters said they thought the loser should challenge the results, as Donald Trump continues to decline to say if he’ll accept the Election Day outcome.

But the Republican nominee – who on Thursday said he would accept the vote totals only “if I win” – does not seem to be speaking to any major constituency within his party. Fifty-three percent of self-identified tea party supporters say the loser should accept the results, and a nearly identical amount – 56 percent – of self-identified conservatives think the same. Just 24 percent of Trump supporters want him to challenge a potential victory by Democrat Hillary Clinton.

Still, underpinning Trump’s argument – that the nation’s voting systems have been corrupted – is a relatively commonly held belief: Roughly half the electorate – 46 percent – say it’s very or somewhat likely that there will be widespread voter fraud. Forty-seven percent believe that fraud will come in the form of intimidation at the ballot box, 41 percent say it will be voters casting a ballot in the wrong location and 37 percent believe people will vote on behalf of someone dead.