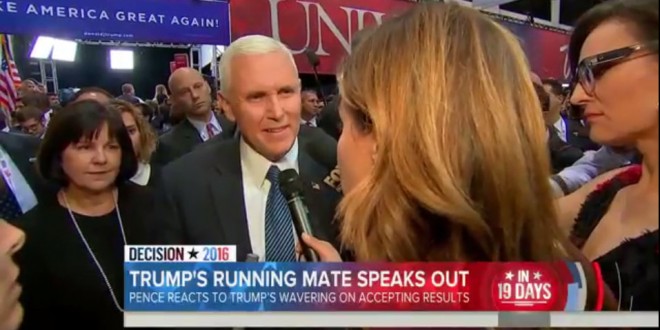 Mike Pence On Trump’s Rejection Of Democracy: If The Vote Is Fair, I’m Confident That We’ll Accept It [VIDEO]

After Donald Trump suggested he might not accept the results of next month’s election if he loses, his running mate tried to give assurances that the campaign would concede if they felt the outcome is “fair.”

“We’re going to continue to call on people all across this country to respectfully participate in the electoral process to ensure that we can all be confident in the vote,” Mike Pence told TODAY following the final debate between Trump and Hillary Clinton. “And if the vote is fair, I’m confident that we’ll accept it.”

Just two days ago Pence had declared that he and Trump will “absolutely accept” the result.

WATCH: “If the vote is fair, I’m confident that we’ll accept it.” @mike_pence tells @HallieJackson https://t.co/FOmxq1in54