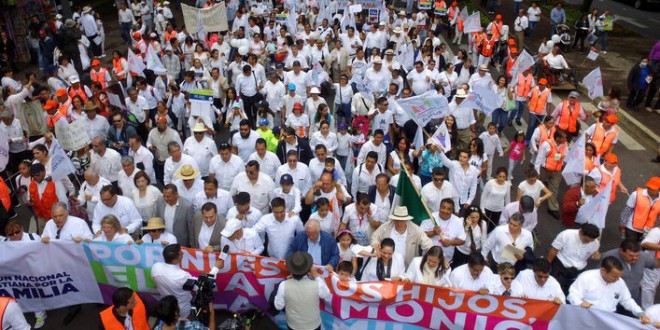 The national media were stunned, and marriage equality supporters were incredulous. There had never been a serious national anti-LGBT movement, and full marriage equality had spread from Mexico City to 10 states since 2009 with only ripples of opposition. The Supreme Court had repeatedly ruled that marriage discrimination was unconstitutional, and many thought the fundamental question was settled. Many LGBT rights supporters thought they’d already won the most important fights — they just needed to push the country’s remaining 21 states to come into compliance with these decisions and allow same-sex couples to marry.

And some things seemed strange about the march, which had been billed as a scrappy grassroots movement. Organizers had set up six Jumbotrons along the march route broadcasting a live feed of the procession, narrated by an advertising consultant who had worked for some of Mexico’s largest mining companies and luxury brands like Versace. The protest’s online image was managed from a war room in an upscale hotel managed by an ad agency that had worked for Mexico’s major right-leaning political party, the National Action Party (PAN), and universities affiliated with the conservative Catholic order Opus Dei. Who was funding all this, the group’s opponents wanted to know, and how did they get so well-organized so fast?

This bit stands out too.

The speed with which their movement mobilized has prompted allegations that there are much bigger forces behind them. The press in both Spain and Mexico have buzzed with rumors that the front is manipulated by El Yunque, a shadowy secret Catholic network with fascist leanings said to have had senior Mexican politicians as members, but no concrete direct evidence of a link with Front leaders has been reported.

There are clearer ties, however, between the Front and other conservative religious factions. The Sept. 24 march was branded as a joint effort between the Front and an organization called the National Christian Union for the Family (“Christian” in Mexico is usually meant to refer to evangelical denominations), which has a Facebook page that lists its official website as a broken link with a URL hosted by the Apostolic Church of Faith in Jesus Christ. The Mier y Terán agency also lists past clients as multiple educational institutions affiliated with Opus Dei, a Catholic order known for promoting doctrinaire church teaching in public policy.

The entire piece is well worth your time. As I’ve noted several times, Brian Brown has a hand in this.

Previous Obama On The Devolution Of The Republican Party: I See A Straight Line From Sarah Palin To Donald Trump
Next John Oliver Rips Hannity Over Online Polls [VIDEO]