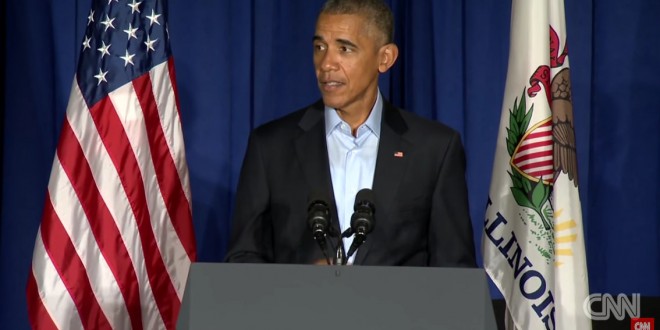 Reacting to the recent release of audio of Donald Trump making vulgar comments about women, President Obama called the candidate “insecure” and said he “pumps himself up by putting other people down – not a character trait I would advise for somebody in the Oval Office.”

Obama spoke about Trump at a planned event Sunday in Chicago for Democratic Rep. Tammy Duckworth, who running for an Illinois Seante seat. Trump and Hillary Clinton debate tonight in St. Louis for the first time after the audio was released.

“One of the most disturbing things about this election is just the unbelievable rhetoric coming from the top of the Republican ticket,” he said. “I don’t need to repeat it. There are children in the room.”

“But, demeaning women, degrading women, but also minorities, immigrants, people of other faiths. Mocking the disabled. Insulting our troops. Insulting our veterans. That tells you a couple of things,” Obama continued.