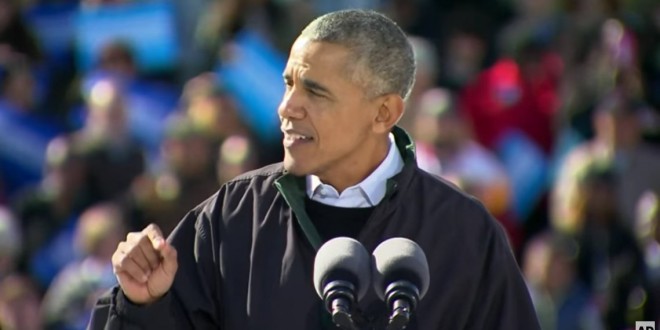 Obama Rips Into Crybaby Trump: He’s Complaining About The Ref Before The Game’s Even Done [VIDEO]

With polls showing a neck-and-neck presidential race in the bellwether state of Ohio, President Obama spent the brunt of his time during a rally in Cleveland today poking fun at Donald Trump for his temperament and complaints of a “rigged system” after a week of bad headlines.

“He seems to be in the middle of the game making excuses all the time for why he might be losing and it’s always interesting to me to see folks that talk tough but don’t act tough,” Obama said. “If you’re tough you don’t make excuses, you don’t start complaining about the ref before the game’s even done.”

“Apparently in a speech yesterday he started talking about global elites, that there was a conspiracy of global elites,” Obama said. “This is the guy who spent all his time hanging around, trying to convince everybody he was the global elite. Talking about how great his buildings are, how luxurious, how rich he is and flying around everywhere.

“All he had time for was celebrities. And now, suddenly, he’s acting like a populist out there?” Obama said. “’Man, I’m going to fight for working people.’ Come on, man!”