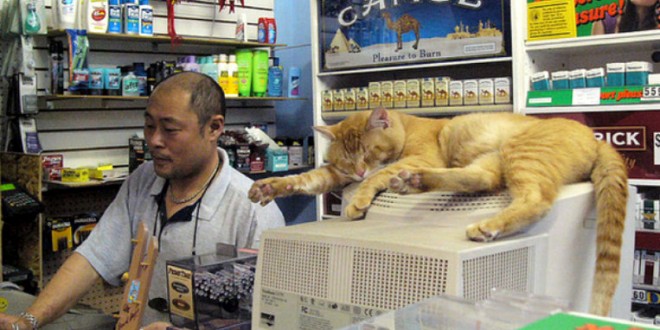 Bodega cats are a beloved Gotham institution and the subjects of popular Tumblr and Instagram accounts. But their technical illegality is in the news this week thanks to an outraged Yelp review that has gone locally viral. Yahoo News reports:

Don’t mess with the bodega cats. Walk into any corner store a.k.a bodega in New York City, and you’ll find a variety of household goods, beer, probably a deli and almost definitely a resident cat. The cats keep the rats and mice away and in return, they get to hang out inside and take naps on the chip shelf.

Usually New Yorkers tend to ignore that bodega cats may be a health code violation, because most people would prefer to see cats hanging around than rats. But recently, one Yelper decided to break the golden bodega cat rule, and gave S.K. Deli Market in the East Village a 1 star review after noticing her bodega had a cat chilling on a stack of Budweisers. Big mistake.

Reviewer Diana D, who has since deleted her post, claimed she had ordered from the bodega before, but decided to pick up her food instead of getting it delivered. That’s when she noticed the adorable cat protecting its store. “Besides being allergic, I wonder what the health code say(s) about this?” Diana asked in her review.

Twitter user SynKami took a screen grab of the review and shared it to his followers, harshly calling out Diana for complaining about the bodega cat. S.K. Deli Market’s Yelp page was flooded with positive reviews on Wednesday, supporting both the deli and cat, who’s name is Ciao Bella, according to one Yelper.

Here’s the petition to Mayor De Blasio. From Gothamist:

Despite the petition’s success, a representative from the New York State Department of Agriculture and Markets told Gothamist that the presence of bodega cats is currently—and will continue to be—considered a “general deficiency, unless it could result in the contamination of product, at which point it would be a critical deficiency” and is punishable by a fine.

Under current regulations, deli and bodega owners face fines of up to $3,000 for having a cat in their establishment. But they can also be fined $300 for the discovery of rodent fecal matter, and no amount of rat poison or sticky traps are as effective as a well-loved bodega cat. You gotta be a miserable gentrifying ass bitch to yelp about the bodega cat pic.twitter.com/rinaytDanY