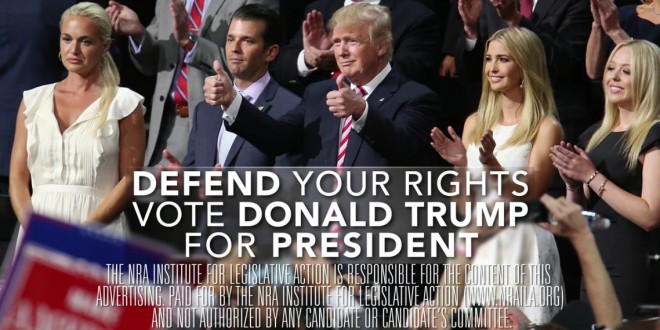 The National Rifle Association is out with its biggest ad buy to date, pushing a sympathetic, young voice for gun rights and Donald Trump’s candidacy. Starting Wednesday, the NRA is spending $6.5 million on a spot featuring a 26-year-old lawyer named Kristi McMains, who said the pistol in her purse saved her life when a man attacked her in a parking garage.

It’s a play not just for rural voters – the NRA’s core base — but also millennials and women, groups Trump has struggled to attract. According to NRA spokeswoman Jennifer Baker, the ads are running on broadcast networks in Ohio, Nevada, North Carolina, Pennsylvania and Virginia, as well as national cable.

In general, the NRA’s ads have been more about attacking Clinton than promoting Trump – some haven’t even mentioned his name. Earlier spots focused on her role in Americans’ deaths in Benghazi or cast her as an elitist hypocrite for wanting to limit gun rights while benefitting from armed protection.

While most of the ads have a gun rights angle, the NRA has taken the unusual step of tying in other themes likely to appeal to those who have negative views of Clinton but aren’t totally sold on Trump.

Previous LIVE VIDEO: Vice Presidential Debate
Next Creationist Ken Ham To Trick-Or-Treaters: “The Penalty For Your Crimes Against God Is Death And Eternal Hell”