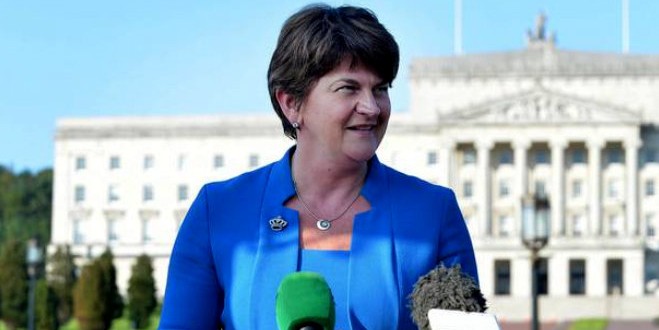 Arlene Foster is “childish” and “disingenuous” for saying online abuse is partly why the DUP is unlikely to change its view on same-sex marriage, Alliance leader Naomi Long has said. Northern Ireland is the only part of the UK where gay marriage is not legal. Mrs Foster said the DUP would use a petition of concern to block any change to the law over the next five years. A petition of concern requires a cross-community majority in the assembly. Last year, a majority of MLAs voted in favour of same-sex marriage. but the motion was blocked by a DUP when it deployed the petition.

If a petition of concern is presented to the assembly speaker, any motion or amendment will need cross-community support. In such cases, a vote on proposed legislation will only pass if supported by a weighted majority (60%) of members voting, including at least 40% of each of the nationalist and unionist designations present and voting. Effectively this means that, provided enough MLAs from a particular community agree, that community can exercise a veto over the assembly’s decisions. A valid petition requires the signatures of 30 MLAs. The DUP has 38 seats, including the speaker.

More from the Belfast Telegraph:

Mrs Foster insisted her party was not anti-gay, but said the torrent of online abuse she received from LGBT activists demanding a law change had made it even less likely for the DUP to support their calls. “Some of the abuse that is directed at me and colleagues online is very, very vicious and I think if activists want to have a conversation about where they are coming from do they seriously think they are going to influence me by sending me abuse?” she asked.

“No, they are not going to influence me by sending me abuse – in fact they are going to send me in the opposite direction and people need to reflect on that.” Mrs Foster said her willingness to use the petition of concern voting tool reflected her party’s strong determination to protect the traditional definition of marriage. “Why would we, when we feel so strongly about the definition of marriage and the redefining of it, why would we give away that tool,” she said.

The next election for the Northern Ireland Assembly is in 2021.