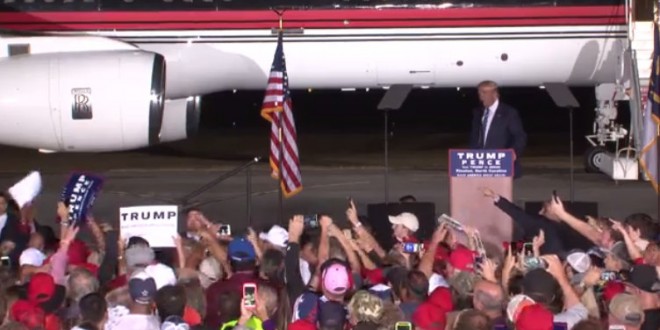 Nash County resident C.J. Cary arrived at the Kinston Jet Center Wednesday night in eager anticipation of a Donald Trump rally. Cary says he wanted to deliver a note to Trump urging him to be less offensive and more inclusive to four demographic groups: black people, women, people with disabilities and college students. Cary, an African-American, says he’s an ex-Marine who also worked in Afghanistan as a civilian for the U.S. Army.

He walked his way toward the front rows, stood about 20-30 feet from the stage and shouted “Donald” while waving his document to try to get Trump’s attention. “He entirely mistook that and thought that I was a protester,” Cary said. Trump’s response: “Were you paid $1,500 to be a thug?” Cary was escorted out.

In the third and final presidential debate, Trump said the Clinton campaign was paying protesters to disrupt his rallies. Cary said he wasn’t there to protest Trump’s appearance. In fact, he said, he supports the Republican presidential nominee. He just wants to see Trump act more polite and welcoming to minorities.

Cary was the subject of a local story back in July:

A Rocky Mount resident is determined to show his support for Republican presidential candidate Donald Trump, replacing dozens of campaign yard signs that have been repeatedly torn down. L. CJ Cary, 62, who lives on Peachtree Street, has at least 40 Trump signs in his front yard. Similar signs have been there since before the Republican primary heated up earlier this year. On June 27, an unknown suspect ripped up most of the signs, damaging many in the process.

Cary told authorities the 36 signs were worth $900, according to a report filed with the Rocky Mount Police Department. Cary last saw the signs in good condition at 4:30 p.m. that afternoon. Two hours later they were found to be destroyed, according to the report.

“I’m don’t know why he needs so many,” said Kenny Jackson, a nearby resident who was walking by Cary’s house Thursday afternoon. “It’s more like an eyesore than anything.” Most neighbors were mum about the matter. One neighbor who asked not to be identified said she didn’t understand why Cary, a black man, supports Trump, who has made several campaign statements perceived to be racist remarks.