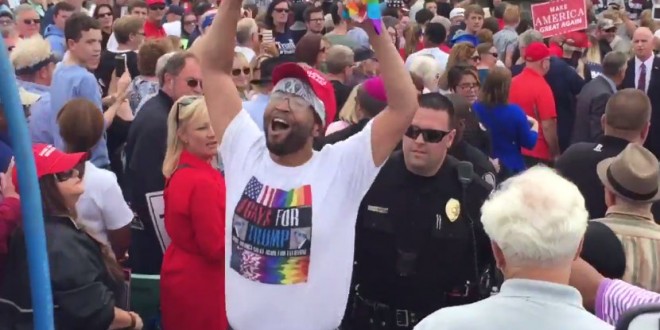 At Donald Trump’s rally in North Carolina this afternoon, a man wearing a “Gays For Trump” shirt and carrying a rainbow flag was ejected by police after he reportedly put a protester in a headlock. In the video below, the protester is removed first as the homocon wades into the crowd to a chorus of cheers and high-fives.

Moments later the alleged attacker is also ejected as the crowd chants, “Let him stay!” As the homocon passes the camera, somebody asks, “Why did you hit him?” The man responds, “I didn’t.” At that moment you can see that he has a Human Rights Campaign sticker on his Trump hat.

UPDATE: A second video reveals that the attack was very violent. I’ll update this post if we learn that an arrest was made.

Protester at @realDonaldTrump rally shoved, put in a headlock by Trump supporters. Here’s what followed: pic.twitter.com/kqM5sn7eQR

Trump was interrupted by a protester in Greensboro and this happened: pic.twitter.com/Hzc2Z82gNu — Holly Bailey (@hollybdc) October 14, 2016

Previous Trump Again Says His Accuser Is Too Ugly To Assault: Believe Me, She Wouldn’t Be My First Choice [VIDEO]
Next Apprentice Contestant Alleges Trump Sexually Assaulted Her: He Thrust His Genitals Against Me [VIDEO]