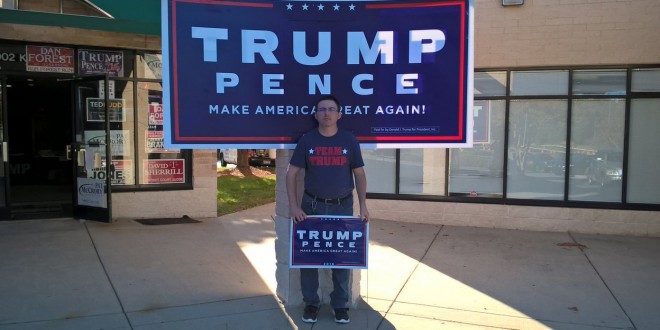 North Carolina homocon Peter Boykin and his supporters have raised $2646 so far in his GoFundMe campaign to post “Gays For Trump” billboards in his home state. Earlier this month Boykin’s husband was ejected from a Trump rally in Greensboro after assaulting a protester. From his poorly written GoFundMe page:

My Husband came up with this Great IDEA to get BILLBOARDS. North Carolina is a Battleground SWING State, if we can win here it will signal Trump is WINNING.

I-40 is an EXTREMELY BUSY HIGHWAY, I want to put this up between Raleigh and Greensboro, the more money I collect the possibility of more billboards. NC, then VA, and then FL if we can get enough funds quick enough.

If you know of a Billboard company let me know. We need to gather positive press and get the word out. You do NOT have to be Gay or of the LGBTQ community to donate. We are in this TOGETHER.

The Billboard will mainly say TRUMP 2016 and underneath say sponsored by supporters of GaysforTrump.org. EVERY BIT HELPS I have over 1000 plus friends if everyone donated $5 we could do this (of course higher amounts are nice) Maybe you can match a donation you make to Trump with a donation to our Grassroots campaign.

We had 3 1/2 Very sucessful gay pride booths in NC “Outing the Vote” for Trump. This is the Last thing we can do before the election.

Also if you Know ANY media Outlets that can give us media time let me know. GaysForTrump.org understands that Trump wants to make America Great Again for EVERYONE

Also if you can call the Local NC GOP and Trump camp and insist that Trump have us speak at one of his last NC rallys it would help the cause.