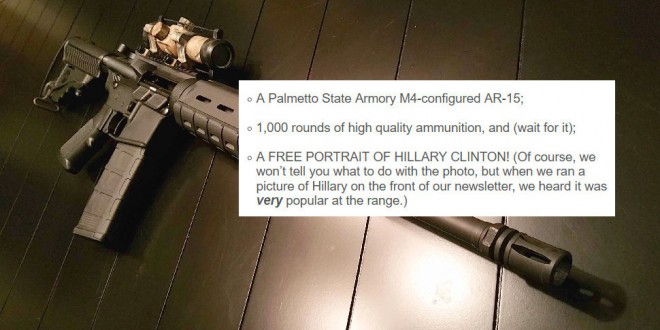 A North Carolina guns right group is raffling off an AR-15 rifle, 1,000 rounds of ammunition and a portrait of Democrat Hillary Clinton to raise money for its federal political action committee.

“Of course, we won’t tell you what to do with the photo, but when we ran a picture of Hillary on the front of our newsletter, we heard it was very popular at the range,” says the raffle announcement on Grass Roots North Carolina’s website.

The announcement, bearing the headline “The ‘Hillary Clinton Special’ and apparently written by the organization’s treasurer, Grant Gardner, says “We all know that if Hillary Clinton is elected president on November 8, panic buying will ensure that by November 9, there won’t be a gun (or ammunition) available for love of money.”

Money raised from the raffle will go to the group’s political victory fund and be used to make independent expenditures against “anti-gunners” running for office.

The raffle has been sharply criticized by Americans for Responsible Solutions, which was formed by former Arizona Congresswoman Gabrielle Giffords and her husband, former NASA astronaut Mark Kelly, and the Brady Campaign to Prevent Gun Violence.

In a statement, the Brady Campaign said “History shows this kind of violent, graphic rhetoric can and has preceded actual violence. Not long before a gunman opened fire on Gabby Giffords and a crowd of constituents in 2011, Sarah Palin launched a particularly militant campaign encouraging gun advocates to ‘take a stand,’ featuring a map with Giffords’ district in rifle crosshairs.”

It was at a North Carolina rally that Trump made his first “joke” about assassinating Hillary Clinton. Previous Curt Schilling Vows To Unseat Sen. Elizabeth Warren
Next NY Times Bombshell: Trump May Not Have Owed Any Federal Tax For 18 Years Due To Business Failures