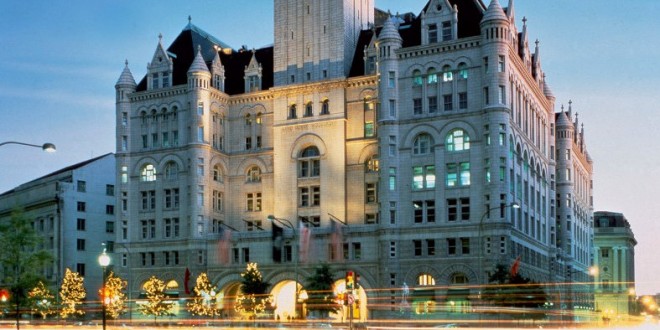 Nobody Wants To Stay At Trump’s New DC Hotel

Not even with the room rates slashed by 50%. New York Magazine reports:

Last weekend bankers and dignitaries from around the world descended on Washington for the annual World Bank–IMF meetings. But just a few days before the conference, rooms were not only still available at Trump International, they were heavily discounted. On October 2, a deluxe room, with a rack rate of $805, could be had for as low $445 a night on Hotels.com. All other five-star D.C. downtown hotels were sold out. By Wednesday, October 5, weekend stays in the deluxe rooms were marked down to $404 per night on Trump International’s own website. The more luxurious 500-square-foot executive rooms, with a city view and marble bath, were only $484. By comparison, at the Waldorf-Astoria in Georgetown, the only available rooms were $1,139 per night, according to Hotels.com.

For a five-star hotel in downtown Washington to have vacancies during major IMF meetings is a little like having empty rooms when the Super Bowl is in town. “The reason why there were vacancies is the political atmosphere. People don’t want to go there for fear that they would be asked, ‘Why are you staying here?’” says Ada Pena, a travel agent with ABA Travel in Washington, D.C. The explosive tape of Trump boasting of sexually assaulting women will only “aggravate that feeling, especially when there are other options,” she says. The hotel not only has a prime location and swank interiors, it boasts a branded Ivanka Trump spa, and tourist attractions related the building’s old function as a post office. But none of that seems to be attracting guests.